← Aphanopetalum resinosum (CUNONIACEAE) Gum Vine Anthocarapa nitidula (MELIACEAE) Incense Cedar →
Medium tree to 30 m, often less, in dry and subtropical rainforest from Manning River, NSW to Herberton, North Queensland. Often along streams or on alluvial flats. Trunk can be fluted and buttressed. Bark is dark brown and scaly with irregular patches. Leaves are alternate, very rough to touch (sandpapery) and prominently toothed. Dark green above, paler, sometimes bronze tinged, below. Young plants have much smaller leaves and are more prominently toothed. This slow growing member of the elm family was cut down to make axe and other tool handles. The axes were then used to cut down everything else remotely usable, as white settlers cleared the land for farms. 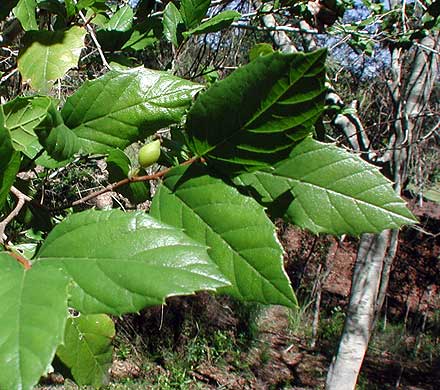 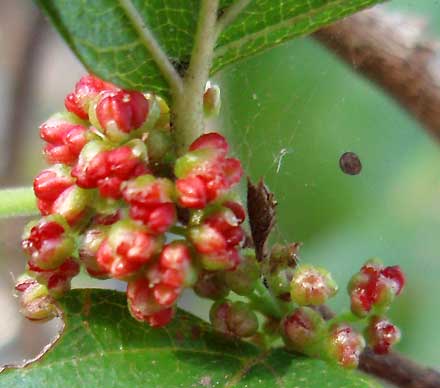 The lateral veins are very prominent below (as shown here) and end in spines at the leaf margins. Fruit is a green, then yellow, then sometimes blackish, fleshy drupe, egg shaped to 6 mm long. Ripe October to January. Often eaten by birds before full maturity. Edible, said to taste of stewed apples. Quite pleasant, sweet. Easy to propagate from fresh seed. Does not fruit every year, sometimes once in five.

Whalebone Tree Streblus brunonianus is similar, being sandpapery and toothed, but less so, and with longer (more lanceolate) leaves. S. brunonianus is a member of the Moraceae. Another Aphananthe species Muku Tree A. aspera also known as Celtis muka, Homoioceltis aspera or Prunus aspera is native to east Asia – China, Japan, Korea. It also has tough, sandpapery leaves. 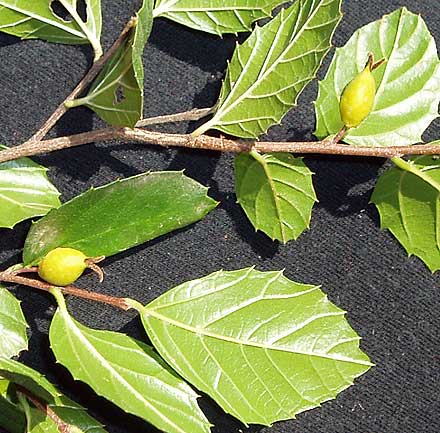 Fruit and under surfaces of leaves. Photo: Robert Whyte

Aphananthe from Greek aphanes invisible, anthos a blossom, in reference to the insignificant flowers. Philippinensis from Latin ensis, indicating origin or place and Philippines, the country, referring to the species being first described from the island of Luzon in the Philippine Islands. Known also as Axehandle Wood, Greyhandle Wood.

Host plant of Common Aeroplane Phaedyma shepherdi and Large Purple Line-blue Nacaduba berenice. No doubt this plant has evolved its tough and spiny leaves as protection against being eaten by various animals including the caterpillars of these butterflies. They in turn toughen up and get larger. No matter how tough and unpalatable a plant, some of its parts (like flower buds and new growth) are vulnerable. When grown on its own, Native Elm has a dense and narrow canopy. It is very common in parts of Moggill catchment, particularly along McKay Brook. In North Queensland it often grows alongside Queensland Kauri Agathis robusta. 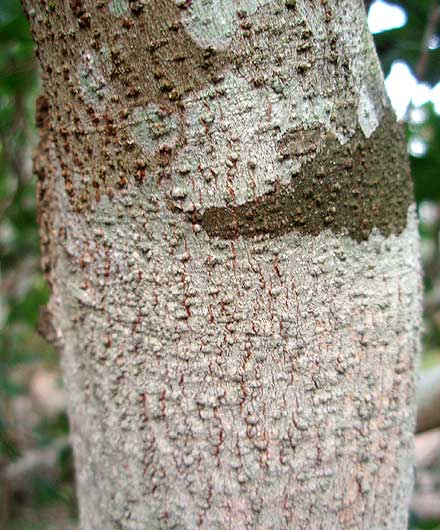