Globose dark blue fruit to 10 mm. The blue berry can be easily opened and the pith around the seeds eaten – it is palatable, but there are a lot of seeds. You’d have to work hard to get a meal. The gingery root tips are also edible.

Easy to grow in the garden, which makes collecting seed very easy. It prefers moist shady areas, but can tolerate some sun. A North Queensland variety with reddish leaf undersides is rapidly mixing with local populations, and is effectively indistinguishable.

Propagate from seeds or division of roots. 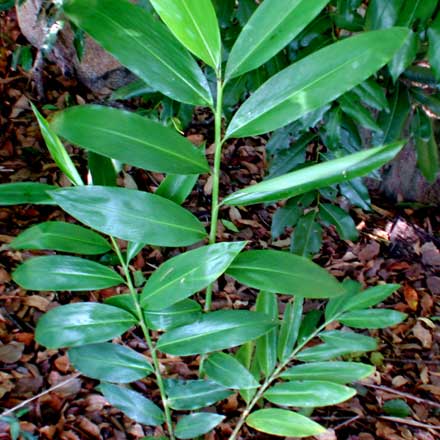 The Alpinia genus are perennial herbs with shoots with well-developed stems belonging to the family Zingiberaceae described as perennial, rhizomatous herbs, meaning they have a type of fleshy underground growth from which the shoots and roots emerge. The plants spread by the growth of this rhizome.

The family is of some economic importance in the production of a number of spices and condiments, e.g., Ginger, Turmeric, Cardamon and Indian Arrowroot. 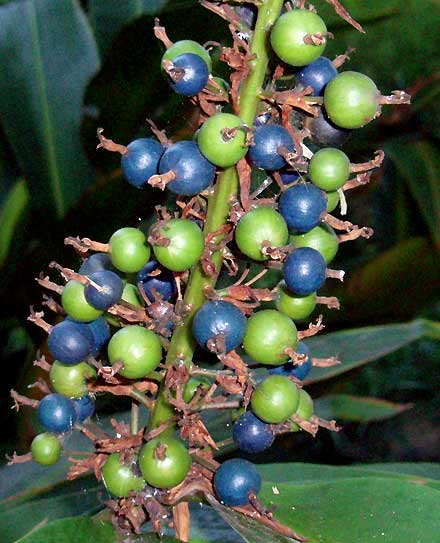 White flowers to 10 mm in spring. Terminal spikes to 30 cms.

Alpinia is a rather large genus of plants, with more than 230 species occuring in tropical and subtropical climates of Asia and the Pacific, and in great demand as ornamentals because of their flashy flowers. 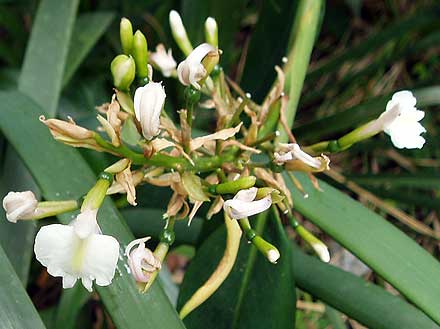 Alpinia after Prosper Alpini, Italian botanist, 1553-1616. Caerulea from Latin caeruleus, dark blue, dark green, cerulean, azure or more particularly, the deep blue of the Mediterranean sky at midday, referring to the colour of the pericarp of the fruit.

DNA sequence methods have shown that this genus is represented by six clades distributed across the tribe Alpinieae, that do not correspond to Smith’s (1990) classification of the genus. Further research is needed to specify the taxa in this genus. (Wikipedia) 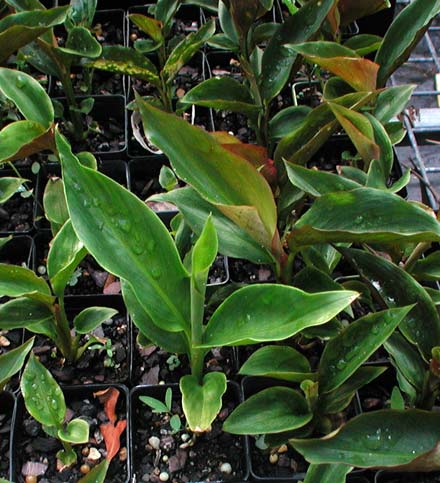