Chiefly in coastal rainforest districts, north from the Illawarra region of NSW, inland to Dorrigo and throughout Queensland. It has large and fleshy heart-shaped leaves held by a long fleshy channelled stalk. It flowers in summer (yellow-green flowers with a pervasive rose-like scent). Fruits with red berries in late summer to autumn. All parts of this plant are poisonous, including the rhizome with some fatalities reported. Propagate from fresh seed.

Cunjevoi is reported to be an antidote to the poison (neurotoxin) in the hairs of the stinging tree Dendrocnide moroides. The crushed leaves were also used as a fish poison. Any part chewed or bitten instantly causes severe irritation and swelling of the mouth. Fatal cases in children have been reported. Sometimes called Elephant Ears, a name that is shared by Colocasia esculenta and Xanthosoma violaceum. 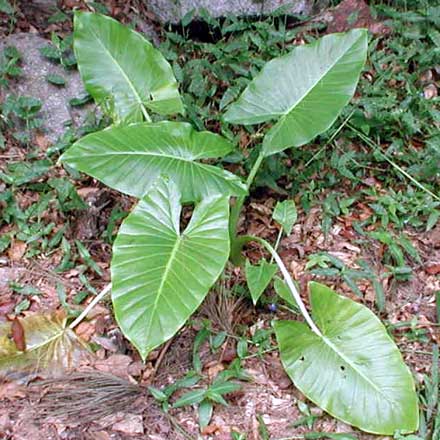 Alocasia (al-oh-CAY-zee-ah) refers to NOT Colocasia, a closely related genus. Colocasia or Kolokasia goes all the way back to one of the early plant writers Dioscorides, an ancient Greek physician, pharmacologist and botanist who practised in Rome at the time of Nero. Disocorides used the word Kolokasia for the edible root of the Pink Water-lily Nelumbo nucifera. 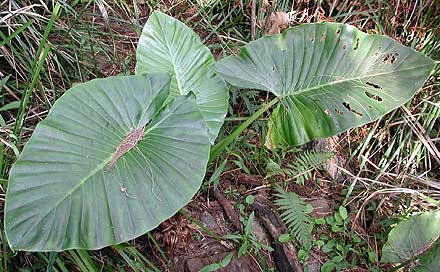