Its early history is unknown because it was spread by humans before its true origins could be determined — it is now widely distributed in the tropics.

It is a tree to 25 m, with wide spreading or hanging branches.

Leaves with conspicuous veins to 20 cm are pale green, simple, strongly 3-lobed (sometimes 5-lobed) coming to a point at the tip. Young foliage has a silvery, powdered appearance, particularly when seen from a distance.

The nut is round, 4-6 cm in diameter; the seed inside has a very hard seed coat and a high oil content. 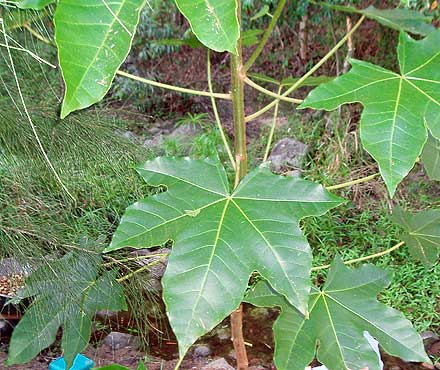 Despite its toxicity, the nut is often used in Malaysian and Indonesian cuisine, where it is called kemiri. In Java, it is used to make a thick sauce which is eaten with vegetables and rice. Apparently the roasting denatures the poison, rendering the nuts edible. Has been recorded as a bush tucker in Australia.

WARNING: Do not eat the nuts raw.

In ancient Hawai’i, nuts were burned to provide light (hence the name).

Aborigines used the oil in making paints. The light, tough timber was sometimes used in furniture and constructions.

Candle Nut oil cake is high in nitrogenous content and makes a useful fertilizer. An average tree may produce 45-65 kilograms of nuts a year. 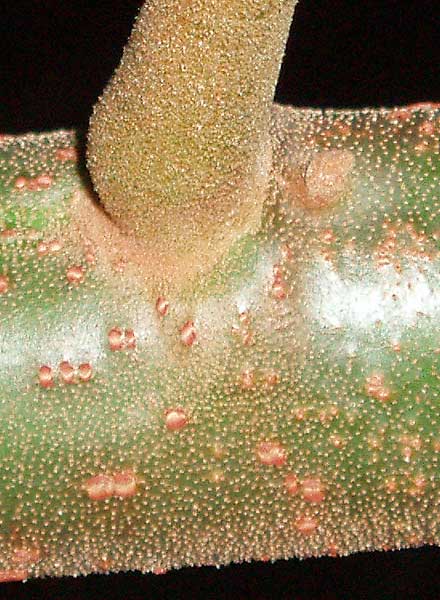