Leaves are compound with mostly 6 leaflets, sometimes fewer. The leaves are alternate but the leaflets are opposite. Virtually no petiolule, somewhat swollen emerging from branchlet. Green above, paler below. Margins toothed, especially in upper half of leaflet.

Leaflets lanceolate, tapering to a fine point, somewhat rough and dry feeling to touch due to the raised venation (especially on the upper surface) and the toughness of the surface.

Flowers are pink to cream, October to December.

Fruit is a brownish capsule with 1-3 black seeds enclosed in a flesh red, edible aril.

Propagate from fresh seed, can be erratic. Birds spread seeds after eating the red aril. 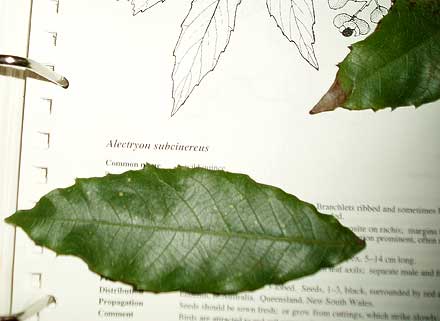 Alectryon from Greek “alektruôn” a cock, possibly because of the comb-like crest on the fruit of the original species in the genus. Pronounced ah-LECT-tree-on.

Host plant for the caterpillars of Eastern or Bronze Flat (Netrocoryne repanda repanda). The adult butterflies are brown, with pale yellow markings on the wings. They are unusual in having a natural resting position in which they hold the wings flat to the surface. Wingspan of about 5 cms. 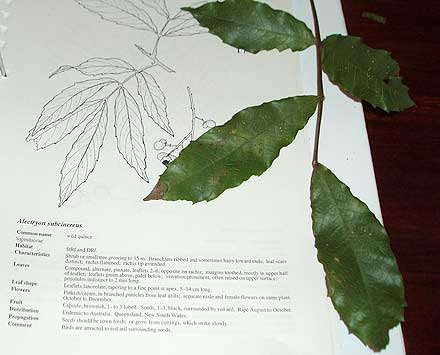