← Albizia lebbeck (FABACEAE) Indian siris Ageratina riparia (ASTERACEAE) Mistflower, Creeping Crofton Weed →
Native to tropical America, Billy Goat Weed is an annual or short-lived perennial herb growing to 1 m. It is a widespread weed of disturbed areas. A common weed but not a particularly damaging one.

Stems and leaves are softly hairy.

Flowers are light lavender blue florets to 3 mm grouped into fluffy flower-heads to 7 mm across. It does not have petals (ray florets) as such. Flowers thoughout the year.

Bracts at the base of the flower-head (involucral) obviously hairy. Flowering occurs throughout most of the year. 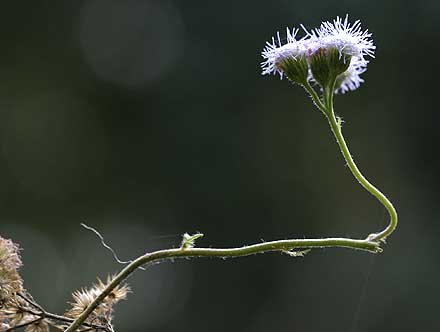 Often confused with another much less common, but very similar species Ageratum conyzoides.

Ageratum houstonianum has a pappus that is shorter than the floret and glandular hairs on its involucral bracts.

Ageratum conyzoides has a pappus which is longer than the floret and its involucral bracts are only sparsely hairy and never have glandular hairs. 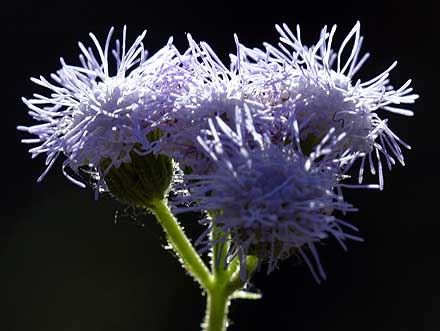