Features a large spreading crown, the trunk in older specimens can be buttressed.

This Acmena is found on the higher slopes of Brisbane Forest Park, and is therefore in our list of Enoggera species, but would probably not be found in the riparian areas lower down.

Adapts to full sun and to cooler climates and has a good pyramid shape for a feature tree. Was formerly Acmena australis. Ingens means “immoderate”. 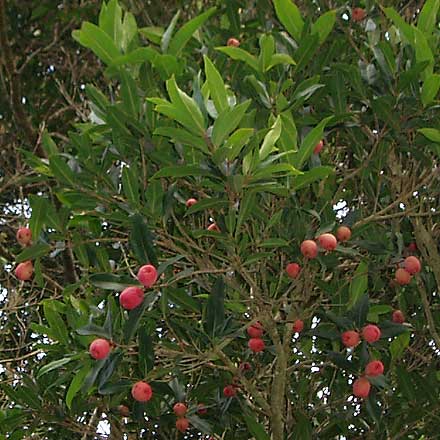 This tree is attractive to fruit eating birds and other wildlife. New growth can be pink, reddish or pale green. Younger trees are shaped like a pyramid, then the crown spreads as the tree ages.

Leaves narrow-elliptic to oblong, smooth, upper surface darker and glossy, lower surface paler. The many lateral veins and the intramarginal veins are distinct.

The showy flowers are white-cream in terminal panicles. 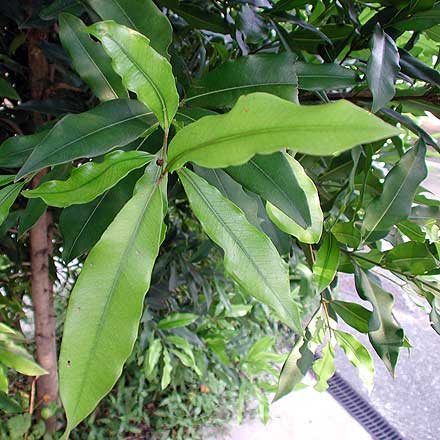 In the garden Red Apple is an attractive, fast growing tree even in cooler climates. It adapts to full sun, but may not become as large as it does in the wild.

The intramarginal vein and the wavy edges are distinct features of the leaves, as is the colour contrast between the upper and lower sides of the leaf. 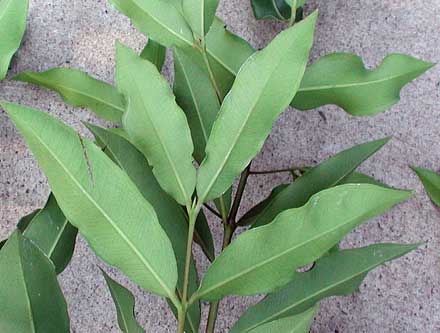 Fruit spherical to egg-shaped to 4 cms, pink turning dark red. Edible (but not very tasty) produced mostly in winter, but can occur at other times.

Acmena from Greek “Acmenae” the nymphs of Venus who were very beautiful, referring to the attractive flowers and fruits. A second source says that Acmena was a nymph dedicated to Venus. This derivation seems the most likely. Finally another source says that the name is derived from the Latin “Acmena” one of the names of the goddess Venus.

Ingens from Latin “ingens”, of immoderate size, vast, huge, prodigious, enormous, great, or remarkable, referring to the great size of mature trees of this species. 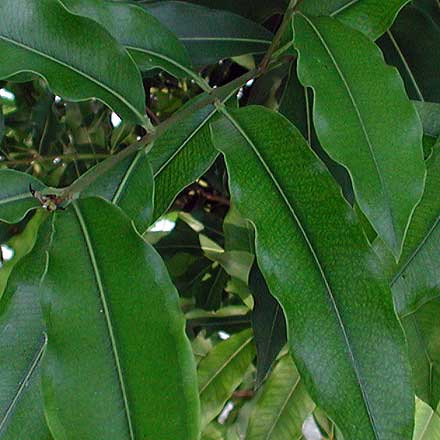