← Acacia penninervis (MIMOSACEAE) Mountain Hickory Wattle Acacia maidenii (MIMOSACEAE) Maiden's wattle →
Medium to large tree recorded as capable of growing to 45 m but more often in the 10-20 m range at maturity in the Enoggera catchment. Grows from North Queensland (Atherton Tablelands) to Tasmania. Larger trees have been milled for their reddish-brown to dark brown timber since the early 1800s.

An understorey tree in wet eucalypt forests, a pioneer in riverine rainforest and a dominant tree in blackwood-teatree swamps in north-west Tasmania. Phyllodes are 7-10 cm, greyish turning dark dull-green, straight to slightly curved, with 3-7 prominent longitudinal veins and fine net-veins between. Flowers are pale yellow, globular puff balls, pleasantly scented. Melanoxylon from Greek mela black or dark and xulon wood, cut and ready for use, or tree, referring to the dark timber of this species. 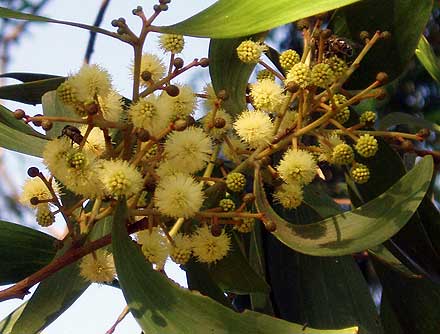 This photograph shows the form the true leaves take. True leaves can persist among the phyllodes until the tree quite developed (perhaps several years) and may appear on coppicing shoots. 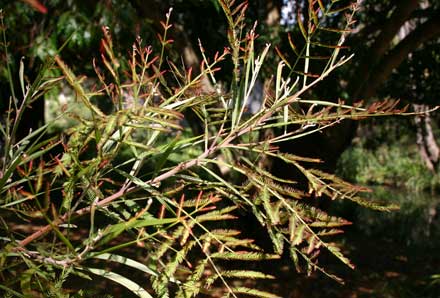 Its root system is aggressive and shallow. It tolerates drought, poor drainage, any soil, salt air, gusty, steady or cold winds, fog, smog, temperature extremes but is not a shade lover. Lives for 15 – 50 years. Suckers also possible if roots disturbed. 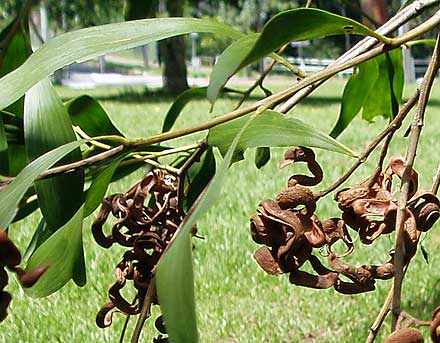 Host for larvae of the Blue or Moonlight Jewel butterfly Hypochrysops delicia. The adults are an iridescent turquoise on top, shading to black at the margins. Underneath, they are pale brown with rows of orange spots outlined in black and iridescent green. The butterflies have a wing span up to 4 cm. 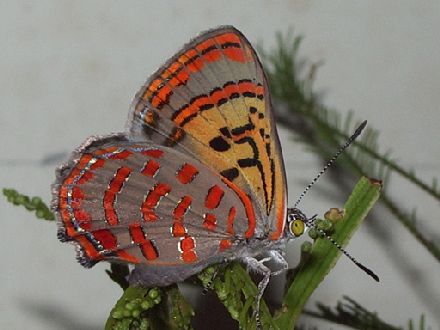 Seeds germinate easily when placed in boiling water overnight. They will germinate in 3-8 weeks. Seed in the soil will germinate when heated by the sun (in disturbed or exposed sites), or after fire. 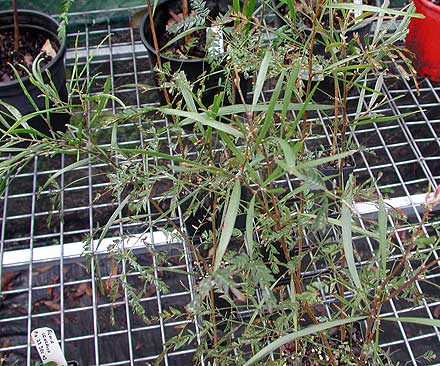