The name refers to the branchlets, which when young are flattened and more or less zigzagged and smooth, with green wings along the edges. Older branches lose the wings and are more cylindrical.

The leaves (like most wattles) are actually phyllodes (flattened petioles). They are straight, elliptical, with 5-9 obvious veins running length-ways. There is a small volcano-like gland on the upper edge of the phyllode stalk. 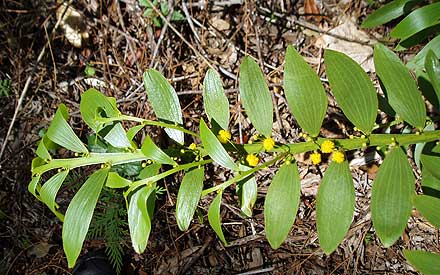 Flowers are small and ball-shaped – up to a centimeter in diameter – on stalks of varying lengths. These puffballs are actually composed of 40-45 tiny flowers. They have a light, pleasant scent. Fowers several times a year, mostly in summer, when other wattles don’t usually flower. The fruit is a flattish pod.

Aboriginal people used the wood for boomerangs, shields and clubs. The inner bark was stripped away and used for twine. (Queensland Museum).

Sometimes grows in thickets and can regrow from underground after fire, rather than by seed. 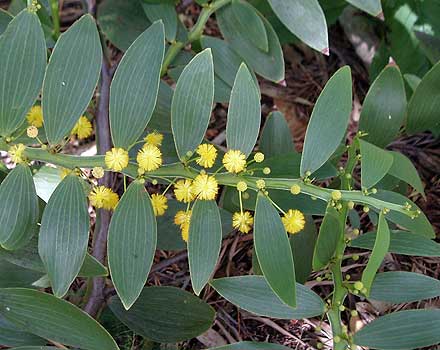 Attractive foliage and flowers, and makes a useful garden plant because it is shrubby. Not all that commonly seen in the wild. Can be pruned in gardens, and if damaged will rergrow from the lignotuber. It can live up to 20 years, resistant to borers which attack other acacia species.

Acacia from Greek acis, a thorn, complanata from Latin complano, ‘flattened’, referring to the stems.

Flat-stem wattle often occurs in open forest dominated by scribbly gum (Eucalyptus racemosa) or spotted gum (Corymbia citriodora). More common in bushland between Brisbane and the Sunshine Coast than in other places.

Propagate with scarified seed covered with boiling water and left to sit overnight.

Type specimens were collected by A Cunningham & C Fraser separately in 1829.

A relatively distinctive species with some similarity to A. homoclada, which usually has narrower and more elongated phyllodes. 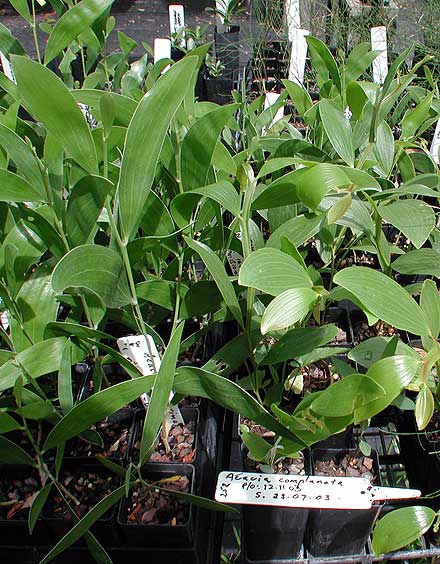